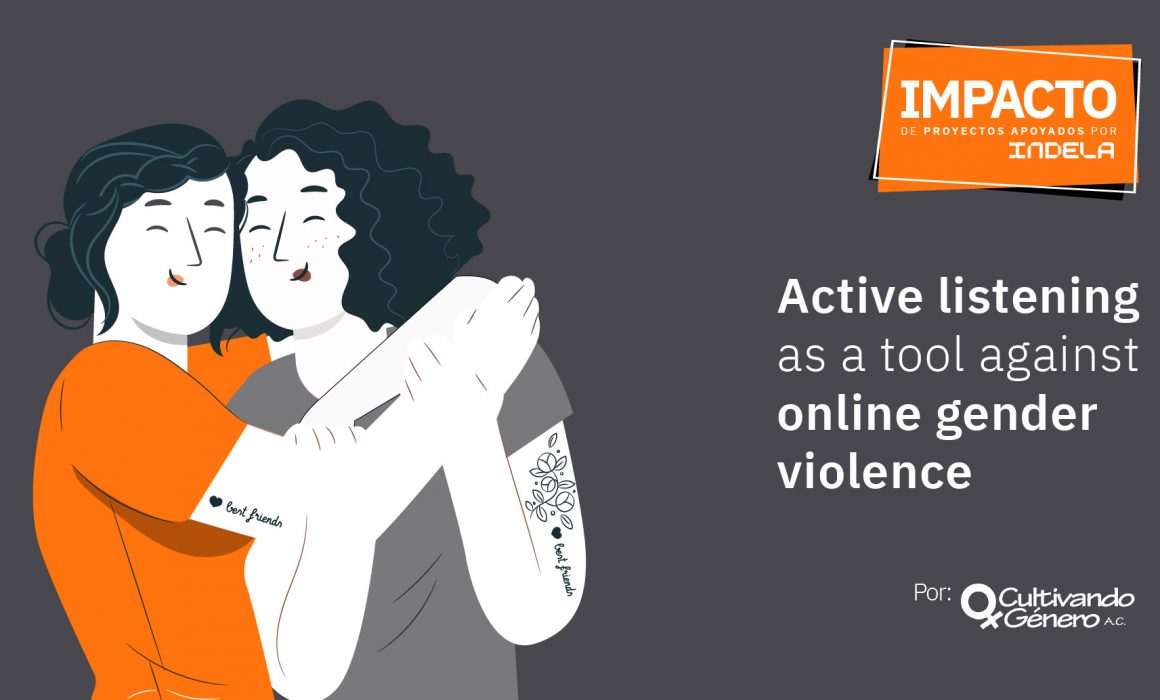 Active listening as a tool against online gender violence

In 2015, the Cyberbullying Module (MOCIBA), a survey conducted by the Statistics and Geography National Institute (INEGI) in Mexico, revealed that 32% of the connected population aged 12 and over in Aguascalientes had experienced cyberbullying. This positioned the State with one of the highest incidences of this kind of violence at the national level. Six years later in the results of MOCIBA 2021 Aguascalientes reduces the percentage and reports that 22.2% of the population has experienced a digital violence situation.

In 2020, in Cultivating Gender we started the digital violence accompanying and comprehensive attention project in Aguascalientes, Mexico, with Indela support. The project was a result of listening and identifying the needs of each sector which meant a learning process in which we had to keep up-to-date because in classrooms, teenagers ask about a variety of topics and expect an answer. But we also understood that it is worth saying “I don’t know”, and assuming that it is a knowledge exchange, in which they can explain us about their experiences in games or platforms that perhaps initially we did not have on the radar as platforms in which digital violence is also present. So active listening has been our great tool for this project development, through which new horizons continue to be opened.

On more than one occasion our hearts were crushed when they told us that they did not believe that the right to access the Internet existed. Because there are haters, people who annoy, insult, doxxean, or there are those who pretend to be someone 12 years old, when in reality they are a “a grown up” man (at the point in which we had to talk about grooming).

We listened to their stories, the colleague’s neighbor who had asked for the pack (set of photos or videos), the friend’s cousin who ran from school because they “burned” her (exposing intimate photos or videos without her consent to damage her reputation), who changed groups because they made stickers or memes, who shared the nudes (without authorization) in the WhatsApp group.

We walk hand in hand with teenagers, in the tour we include mothers, fathers, teachers and institutions because in prevention and care measures in a school context all authority figures are strategic to guarantee the protection of physical and emotional integrity of childhood and adolescence, considering that each of these figures requires information and the development of specific skills to provide support. Digital violence is a systemic problem, which requires that all actors act in a coordinated manner with a common language, understanding the causes and conditions that cause digital violence. The participation of these figures has allowed us to start a dialogue process from a rights and gender perspective approach. Putting cases of digital violence as the axis of learning, which highlighted some factors that are strategic and emerging to address, such as: the digital literacy gap, access to technology and the Internet, gender stereotypes, adult-centrism and authoritarianism as attitudes that keep adults from understanding the importance of their role in the digital violence prevention and care.

After several months we paused to observe what we had developed and implemented, and the new findings that this stage has left us, to undertake new incidence lines. For example, gender stereotypes have increased and are accentuated in the teenagers’ narratives as they go through the school grades, and from these mandates they limit their resources to face problems and/or ask for help which can have a strong impact on their physical and emotional integrity.

The classrooms meetings allowed us to see that teenagers identify the importance of having secure passwords and characteristics they should have, that they should not open content of dubious origin, but the attitude of underestimating the impact that these actions have out of digital on their lives persists, because on many occasions the sense of belonging weighs more, looking good with their friends, and going with fashion, at the cost of protecting themselves and their safety, due, among other factors, to the development lack on socio-emotional skills that would allow them to exercise their decision-making with greater autonomy.

The incidence and close work with public institutions has been very important, because it has allowed us to identify the lack of protocols, mechanisms and technical and operational tools for the legal framework execution around digital violence, an aspect that must also be addressed to provide information and accompaniment within a rights framework.

Making visible the characteristics and access quality to information technologies a teenager’s right, allows us to approach a structural problem in terms of information access, communication, broadband, since when these conditions are not reached and the Internet use deepens existing inequalities.

During this two years project, we sought to sensitize the population both in public spaces and on communication platforms, by a communication campaign through offline interventions such as a mural on public roads, stickers distribution in schools and even in the digital by flooding social networks with the campaign #FrenaElHate. In Aguascalientes we trained dozens of people from the public service in different areas, institutions and profiles. We talked to mothers, fathers, and teachers, we visited many schools, we listened to teenagers. We positioned the topic, attending forums, panels, conversations, podcasts… Everything we have learned, we gathered together in four incredible guides that we put at your disposal!!

We recognize and appreciate the trust and committed effort from teachers, psychologists, social workers, and authorities from different public agencies that allowed us to work in their educational spaces and government offices and that today use the Guides and recommendations that we have developed as part of the action that seeks to transform educational spaces into safe coexistence areas. Thank you for trusting in our work and opening your community doors to continue reaching many more schools.