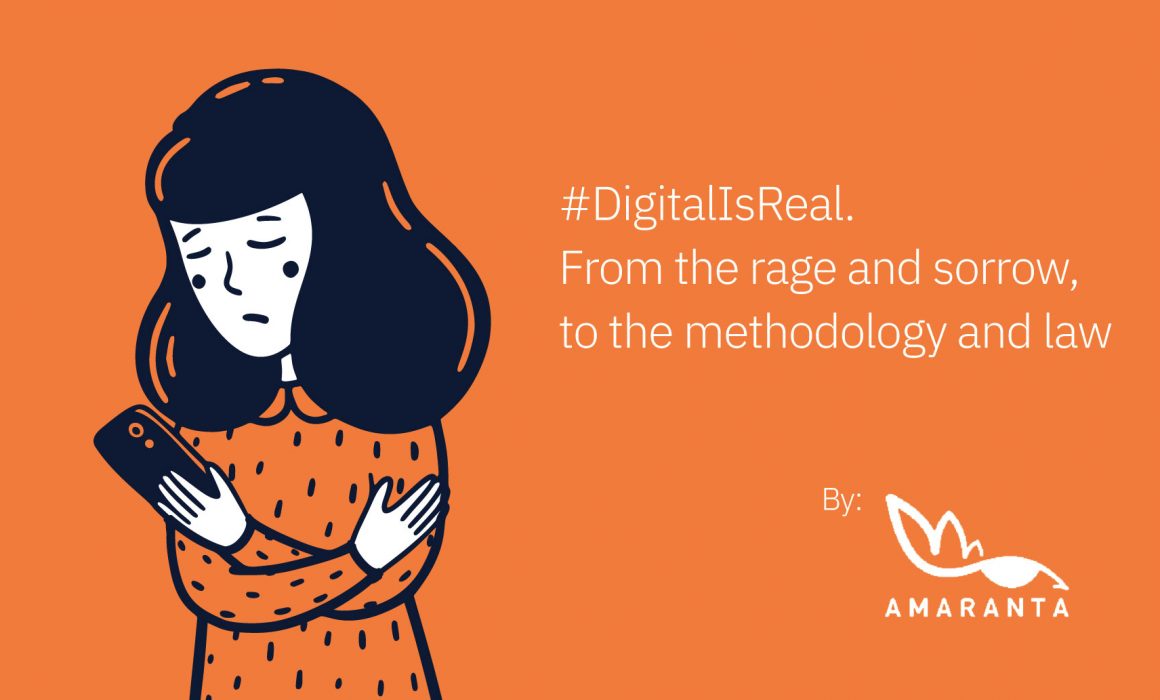 #DigitalIsReal. From rage and sorrow to methodology and law.

When we sent our application to Indela, we were doing it out of anger and sorrow (rather than from methodology): at that precise moment, one of ours was going through digital gender violence in its most intimate degree.

The worst thing is that it was not the first time that something like this had happened, but once again we were facing the same obstacles. As if Chile had not advanced even half a step in the meantime: the laws inexistence, the police complaint re-victimization, judges who declared themselves incapable of reaching a resolution, the hypervigilance, the fear that something might happen to the companion, the slow response from the digital platforms where the violence occurred, and the impotence of not being able to do as much as we wanted.

Today, we can look back to see how far we have come (bearing in mind that there is still a long way to go): Together with other groups and organizations, we were summoned by legislators such as deputy Maite Orsini to imagine and create the first Digital Violence Law in Chile. This Law will comprehensively address different violence kinds that occur on the Internet, such as cyberbullying, non-consensual intimate images dissemination or sending unsolicited sexual images, the sensitive data dissemination for malicious purposes (doxing), identity theft, among others. A Law that will address it in a non-punitive way, but focused on education and prevention.

This Bill is still under discussion, precisely because its focus was more educational and because we refused it to be used for the communicators and activists’ censorship.

It was not the only incidence instance: we even managed to have our voices heard in the process that Chile was going through to write a new Constitution. Invited by the 14th District constituent, Francisco Caamaño, we were able to create article 89 that sought for the State to guarantee violence free digital spaces, through education for prevention, laws and public policies. It was the first time that this right was recognized at the constitutional level in all Latin America, and even globally.

Article 89 did not work on its own. To end and combat gender-based violence on the Internet it is necessary to incorporate a comprehensive and non-sexist sexual education in a transversal way.  The proposed Constitution enshrined this right, as well as the understanding that violence is multifactorial and is based on male chauvinism to continue repeating day by day in all spaces that the women’s body and dissidents continues to be a taboo and morbidity object and, a conquest and patriarchal appropriation space.

With comprehensive and non-sexist sexual education, much of the morbidity that leads some subjects to share their ex-partners intimate photographs would not support analysis. The teenagers self-esteem would not depend on the image or the excessive advertising bombardment looking for “the perfect”.

Unfortunately, this democratic process was severely affected by fake news, which took its toll on a population without digital literacy or comprehensive sex education or civics. This, added to the large sum of money invested by conservative sectors in digital advertising promoting this fake news without any kind of regulation ended with the proposal being rejected. Something that has increased the uncertainty climate at national level and that buries a process that it could have put emphasis on a welfare state and collective care.

Events like this remind us why it is so important to continue fighting for more democratic, feminist, violence- free, and accessible digital spaces. As the Amaranta NGO through a comprehensive strategy that permeates the population in a broader way. We have created digital violence glossaries with Spanishized terms to approach the subject in a friendlier way, considering that learning English continues to be a privilege in our country and in Latin America ; We have developed step-by-step guides to accompany this violence survivors in : documentation, reporting, self-care and networking; we continue to create materials that are handed out in the streets, fairs and marches; and more importantly, we will get closer and closer to working in all those territories that have been forgotten and isolated, either because of their geography (islands, mountains, extreme regions), as well as because they are not a capital (as occurs with towns and small cities within the provinces).

Although the rejection to a new Constitution -which would have guaranteed a series of social rights in record time- was a severe setback, we have turned it into the fuel to continue fighting for a safe Internet for all.