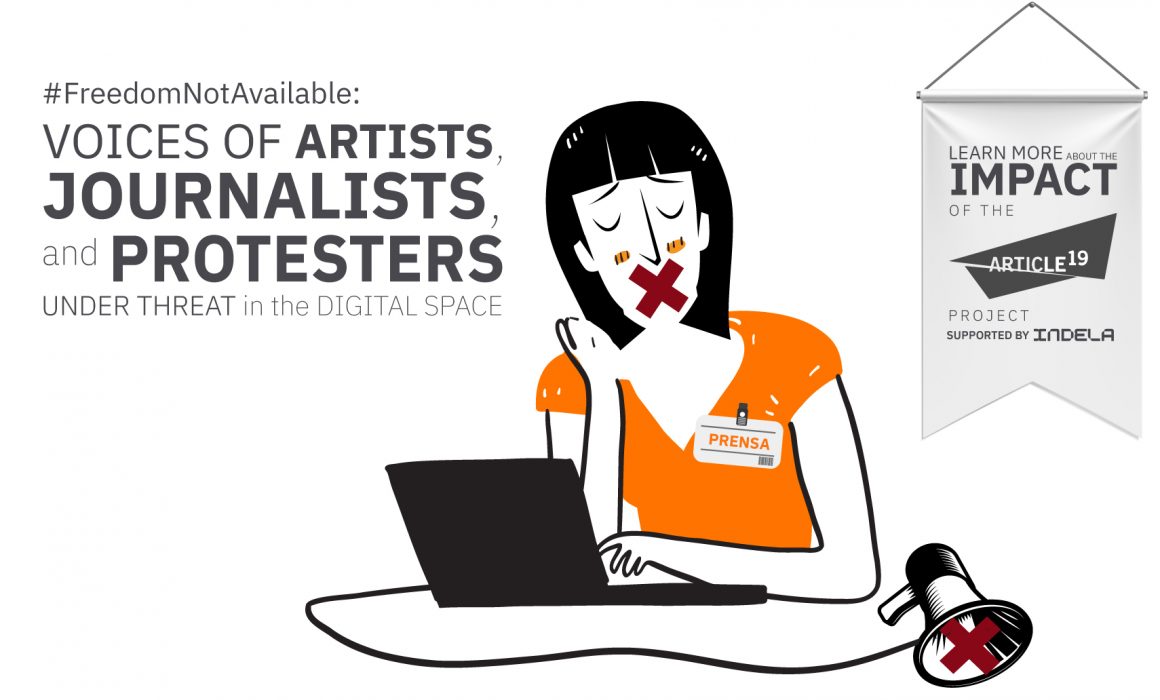 #FreedomNotAvailable: Voices of Artists, Journalists and Protesters Under Threat in the Digital Space

By ARTICLE 19 Mexico and Central America

In a context of already widespread violence to silence the press in the physical environment, Mexico’s journalists now face additional pressure, threats and intimidation forcing them to delete digitally-shared content. Content removal[1] has the potential to silence essential expressions in a democratic society. Voices of artists, journalists and protesters face the risk of being eliminated and illegally erased from the digital space without the guarantees of due process.

The “Defending Freedom of Expression on the Internet: Transparency and Due Process of Online Censorship through Content Removal” project supported by Indela has brought this reality to light and shown the negative effects it has on freedom of expression and the right to information.

The various activities carried out as part of this project have helped some actors of the State publicly acknowledge the commitment to take on higher levels of transparency regarding removal requests made to social media platforms by institutions of the Mexican government. It has also contributed to a demand for social media platforms to include data about which State institutions are making the requests, the type of information they are asking to have removed and the reasons these requests are made, in transparency reports.

Through the #FreedomNotAvailable and #NeitherCensorshipNorPadlocks campaigns, we, along with other organizations, have managed to bring into the public agenda the need to defend freedom of expression from extrajudicial mechanisms like “notice and takedown” or copyright claims to remove content on social media platforms, web pages and web hosts.

Through a partnership with Harvard University’s Cyberlaw Clinic, we developed the white paper Access Denied: How Journalists and Civil Society Can Respond to Content Takedown Notices[2] which describes the impact of the DMCA (Digital Millennium Copyright Act) on journalism and the work of civil society organizations in Latin America. The Karisma Foundation (Colombia), Intervozes (Brazil) and Espacio Público (Venezuela) participated in the creation of this guide.

The impact of this project must be viewed in light of the #FreedomNotAvailable: Censorship and Content Removal in Mexico[4] report, which reviews the various mechanisms used in the country to remove online content and interfere in the right to freedom of expression and information of journalists and all users of technology.

The report explores how content removal undermines the press and the flow of information and manifests itself through: 1) content moderation policies on digital platforms, which are incompatible with the human right to freedom of expression; 2) threats and harassment of journalists to remove information from their spaces or digital profiles, and 3) content removal requests made to digital platforms—under ambiguous legal assumptions and without following due process or complying with judicial guarantees. It also describes the relationship between various institutions of the Mexican state and digital platforms to ask them to remove or restrict access to content. In this scenario, an information gap prevails, as does a lack of clarity about the legal basis giving the authorities the necessary power to request the removal of online content.

According to transparency reports from Twitter, Facebook and Google, between 2017 and 2020 Mexican authorities made 38 thousand requests for content removal. However, through transparency requests, reporting parties reported only 1697 requests for removal during that same period. With this, we have identified inconsistencies in the information provided by authorities, so we only know 1 in 10 requests made by the Mexican State to digital platforms. That is, for 95.6% of content removal clauses, we have no information, transparency, or accountability.

Indela’s support has been crucial for presenting the results of the investigation and sharing tools to deal with the abuses existing for content removal. Their support has also been vital for the Mexican State, digital platforms and other actors to take on greater commitments to transparency and accountability, as well as protecting the right to freedom of expression and access to information in the digital space.

[1] Content removal is the practice of deleting or restricting the circulation of information online, making use of legal frameworks and private mechanisms that limit its access. It is used illegally and irresponsibly to censor information of public interest that should circulate and remain accessible.

[2]Available at the following link: https://articulo19.org/reclamos-de-derechos-de-autor-son-utilizados-para-eliminar-contenidos-periodisticos-y-de-activistas-en-america-latina/

[3] The four guides are available at: https://seguridadintegral.articulo19.org