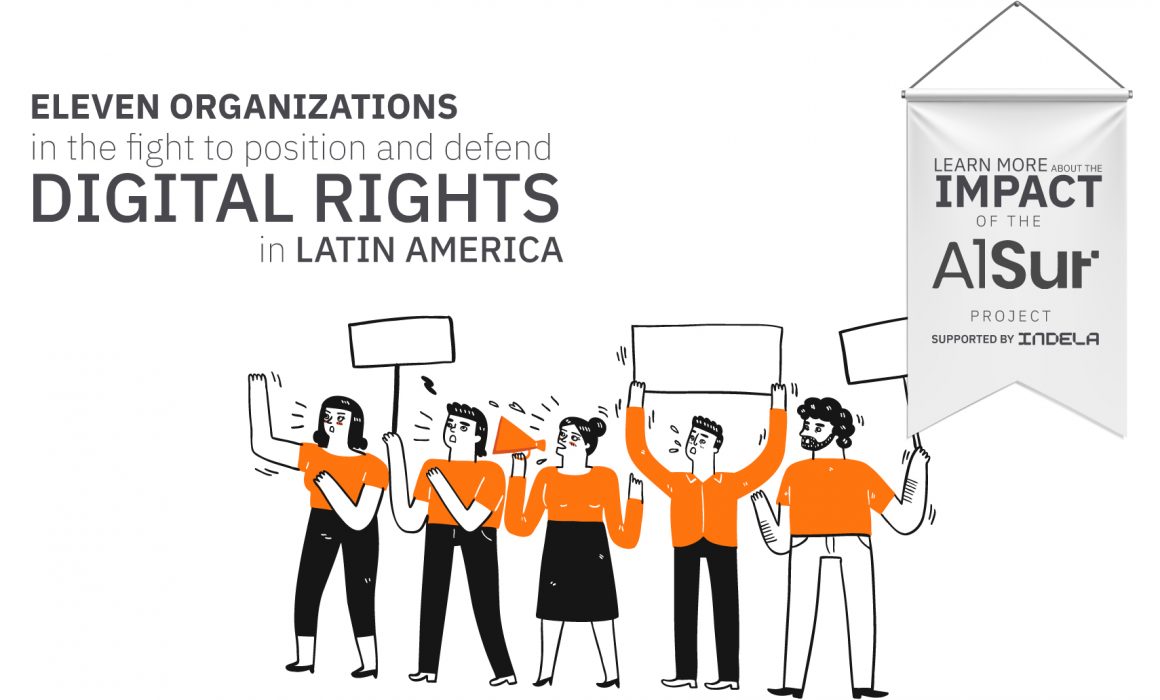 The rapid advancement of digital technologies and their widespread use by governments, businesses, and general society has led to much speculation about their effect on human rights. These technologies’ ability to execute mass surveillance, capture personal data, and spread mis- and disinformation requires a comprehensive understanding and concerted response on the part of civil society. This was the motivation for the creation of Al Sur, a consortium of eleven civil society and academic organizations[1] from Latin America working to strengthen human rights in the digital environment. This consortium was one of Indela’s selected projects for 2019, through which it sought to consolidate its institutionality and generate greater capacity for advocacy at the national, regional, and international levels. With Indela’s support, Al Sur organized multiple sessions with specialists, expanding not only the knowledge base but also the network of action to strengthen the digital rights ecosystem. The organizations comprising the consortium received training on “Strategies to access information about surveillance practices,” carried out by Luis Fernando Garcia, Director of R3D de México, and “Negotiations surrounding the Second Additional Protocol to the Budapest Convention on Cybercrime,” which strengthened the alliance between Al Sur and the Electronic Frontier Foundation (EFF). Prof. Sean Flynn of American University also carried out a training session about intellectual property and copyright during the pandemic, which offered the opportunity to review the regulatory market of the entire region. Building a regional agenda Al Sur developed three research reports through this project not only as a strategy to promote a proactive regional agenda, but also to allow other organizations to join and work with the consortium:

As a consortium, Al Sur is also interested in understanding and generating a stronger relationship with regional and international interconnection spaces. To better position themselves in various international forums, they are working on mapping and exchanging best practices, generating research, and holding meetings and consultations with specialists. Al Sur analyzed the United Nations Organizations (UNO) System, the Organization of American States (OAS), and other international bodies, and through this analysis compiled a document—currently under review—whose publicly available version is being considered by civil society in the region. To further augment their position, Al Sur has also increased its digital presence by launching its webpage in three languages and publishing more content on is blog and Twitter account. The impact of Al Sur’s work in the region has led to invitations to make substantial contributions in high-impact spaces; Twitter invited the Secretary to be part of its Security Council, the Special Rapporteur for Freedom of Expression of the Inter-American Commission on Human Rights (IACHR) asked the organizations of Al Sur to be part of the discussion about misinformation during the pandemic, the consortium was invited by Electronic Frontier Foundation to attend a inter-regional cybersecurity and cybercrime group, and it was represented at the Global Privacy Assembly. In addition, Al Sur created recommendations on important  international reference documents, including the Second Additional Protocol to the Budapest Convention on Cybercrime, the public consultation of the Government of Brazil on regulation of the Marrakesh Treaty, the review of the first version of the draft text of the UNESCO Recommendation on the Ethics of Artificial Intelligence, “General comment No. 25 (202x): children’s rights in relation to the digital environment” of the United Nations Committee on the Rights of the Child, and the call of the Council Working Group on International Internet-related Public Policy Issues (CWG-Internet) of the International Telecommunication Union (ITU). One of the consortium’s most significant milestones is Al Sur’s now expanded capacity to react to international discussions and debates. The research and reports published allow it to anticipate emerging issues and move forward with evidence, positioning itself as a collective, and as such has strengthened its alliances and identified spaces in which it can have a greater impact. Ultimately, the consortium and its collective work have been furthered by the support of Indela. Al Sur is better positioned to think more strategically about its next steps and to offer a more organized space for its members to participate in the collective effort.